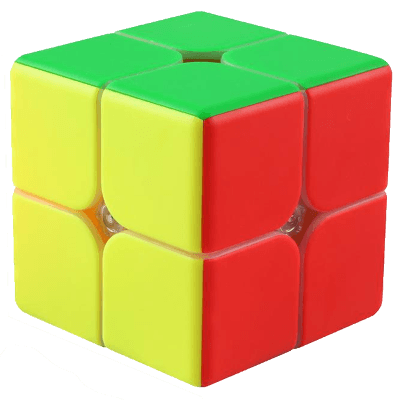 This tutorial uses the same method used in the “Ryan’s Guild to Speed Cubing” except without any steps involving edges. So first, you solve the first layer, then you orient the last layer, then you permute the last layer. This may sound very confusing to you (or not make sense at all) but don’t worry, everything will be explained in the
following pages. Before we start getting into solving the first layer, there are some important things you should learn like how to read cube notation and learning the names of the faces on the cube. If you can already solve a 3×3 Rubik’s cube or are familiar with notation and face names, then you can skip this part.

Face names are very simple to understand and they let you know which face to turn while reading cube notation.

Now if you hold your cube strait in front of your face, the face of the cube directly in front of you is called the F face, which stands for Front. Pretty easy right?

The cube faces on the right and left side of the cube are the R and L faces. R standing for Right and L standing for Left.

The face on top is U for Up face. The bottom is D for Down face.

And the back face is B for Back. Just remember that the bottom face isn’t B or else you’ll have 2 B faces.

In the diagrams I use for examples, I will use the following face positions: 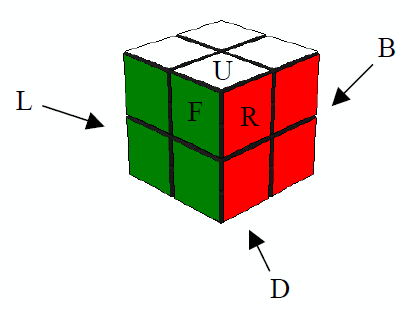 Cube Notation is basically the language of algorithms. An Algorithm (algo for short) is a sequence of moves that
causes certain pieces on the cube to move or rotate in certain ways. These algos are written down using cube notation.  Cube Notation lets the reader know what face to turn, in which direction so they can use the algo.

Here are some examples:

There are more aspects of cube notation such as lower case notation and M, E, and S turns but these don’t apply to the 2×2 so I’ll leave those aspects for solving a 3×3.

However, there is one more thing about cube notation to teach, these are x, y, and z rotations. Alike U, R, L, F, D, and B turns, x y z rotations can also be found as just capital, capital with an apostrophe, and capital with a 2.

Here are examples of rotations:

Now that you know everything you need to know in order to start solving a 2×2 Rubik’s cube, lets start with solving the first layer. To the right is a picture of a completed first layer (the grey represents that it doesn’t matter what colour that piece is), now lets learn how to get there. If you can already solve a 3×3, you can skip this step because it’s just like inserting first layer corners.

To start, find a corner piece with white on it as your starting point (it’s best to start with white because when solving the cube fast, white is the easiest colour to spot so you can find your pieces faster). Now put the white sticker of that piece on the U face. Now find another white piece with one of the colours on that piece (other than white) match up
with one of the colours on your starting piece. For example, if your starting piece is the White Green Red piece and the other piece you found is the White Green orange piece, then you found the right second piece because they both share the colour green. However if your starting piece is White Green Red and your second piece is White Blue Orange, although they both share the colour White, they are matching piece because they have to have a matching colour other than white.

Since they share the colour green, I moved my second piece to the green side. 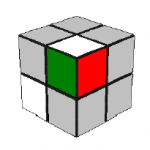 Case 3 is my least favourite because it takes two steps. Do these moves R’ D2 R D:

Voila! you now have case 1!

Now you should have a 1x1x2 block like this: 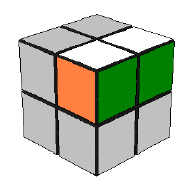 Once you have the 1x1x2 block, find another white corner piece and repeat the same process you did for the second one. Then repeat again for the forth and you’ll end up with a successful first layer. This will all be possible unless you come across something like this: 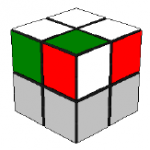 Congratulations! you have officially solved the first layer of a Rubik’s 2×2 cube. Now there are only two more steps until you’re done. But before you move onto those steps, you should keep scrambling your cube and solving the first layer over and over again. This is necessary so that you will never forget how to solve the first layer. Also, the more time you spend practicing, the faster you’ll be able to solve the cube. 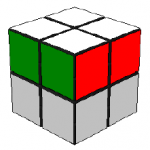 Step 2: Orienting the last layer
Now that the first layer is solved, it’s time to flip over your cube. You’ll now have 1 of 7 possible cases for this step. If you have read the Ryan’s Guide to Speed Cubing or use a similar 3×3 solving method, then you will know what to do here. For those of you who don’t know what to do, you’re looking in the right place. If you’re still unsure about the meaning of orientation, orientation is just flipping the pieces. To orient the last layer, you’ll want to flip the pieces so that they are yellow side up like in the picture to the right. As I mentioned before, there are 7 cases for this step but
luckily for you, you’ll only have to learn 2 algs. To demonstrate top layer algorithms, I will use a diagram like this with the following face names: 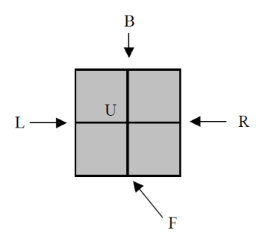 You’ll often see a yellow line on the side of a square, this just lets you know where a yellow is that you can’t see 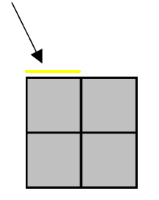 The two algos you’ll have to learn to orient the last layer are the left and right Soon algos. Luckily for you, these algorithms aren’t very hard to remember but you will have to remember where to use which Soon on which case. First I will show you the two cases that require only one Soon algorithm. 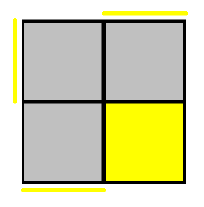 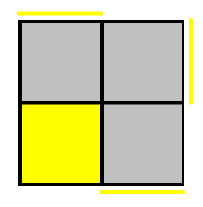 These next 5 cases require 2 or more Soon algorithms. 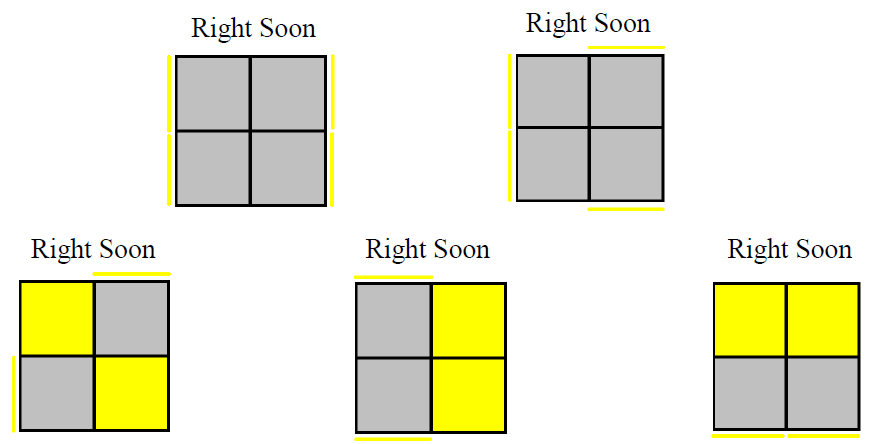 Now with what I have taught you, your cube should look something like this one. Now, don’t forget to practice, practice, practice up to this step or else you might forget. You’re almost finished solving your 2×2 now, there’s only one step left. Luckily for you, this next step only requires memorizing one more algorithm except this alg is a bit
trickier than the previous ones. 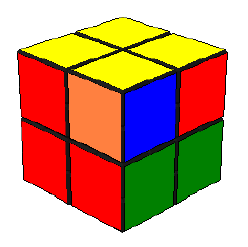 Step 3: Permuting Last Layer
As well as orienting, permuting is probably a new word to you. Permuting means to cycle certain pieces while remaining the same orientation. If you can already solve the 3×3 with the same method in the Ryan’s Guide to Speed Cubing, then you just have to do the same you would for permuting Last Layer corners.

To start, find a pair of last layer corners with adjacent colours matching (if you don’t have any, don’t worry, keep reading). Then pair them up with the first layer pieces of the same colour so you end up with a 1x2x2 block. Here’s an example:

CONGRATULATIONS! You have now officially solved the Rubik’s 2×2 cube. Like I said, don’t forget to practice because if you don’t practice, you won’t be able to solve the cube without instructions. Now with your newfound
skills, you can go and show your friends and when your friends say “Oh that’s easy, it’s only a 2×2.” let them give it a shot and see how hard it really is. With practice, you will definitely get faster, then you can enter a tournament and show off your new skills.